On a tour last week of the Ashalim Solar Thermal Power Station in the presence of Minister of energy Dr. Yuval Steinitz, accompanied by the controlling owner of Shikun & Binui Group (TASE: SKBN.TA), Naty Saidoff and other guests, announced the start of the commercial operation of the largest renewable energy project in Israel and one of the largest in the world. 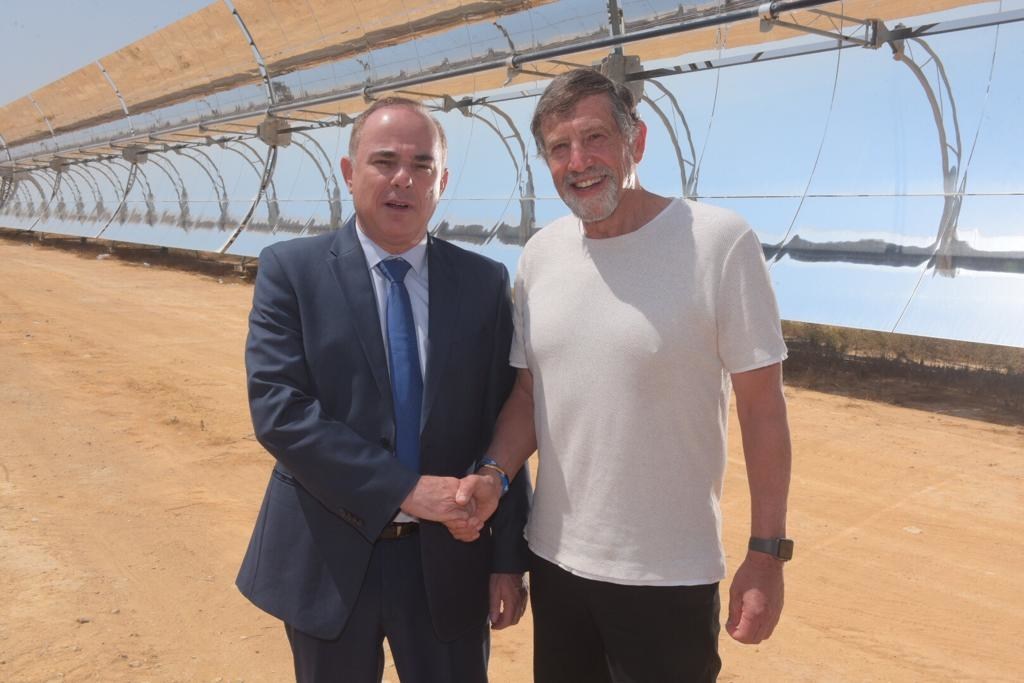 Several months ago, when the plant was completed and connected to the national electricity grid, Negev Energy Co. obtained the necessary permits, including a permanent electricity production license from the Electricity Authority and the Ministry of Energy, and began the commercial operation of the solar thermal power plant in Ashalim for the duration of the franchise.

Negev Energy, a joint venture of Shikun & Binui Energy (50%), the Noy Infrastructure Fund (40%) and the Spanish firm TSK (10%), won the tender that had been issued by the Accountant General at the Ministry of Finance and entered into a design franchise agreement in 2013, for the planning, design, financing, construction, operation and maintenance of a 121 MW thermo-solar plant for a period of 25 years.

The 988-acre plant (the size of the city of Petah Tikva in Israel) is composed of some 16,000 parabolic troughs and about half a million concave mirrors, which converts solar energy into steam that is then used to generate electricity. The Negev Energy Power Station has a unique system for storing thermal energy, based on molten salt, which allows the plant to operate for approximately an extra 4.5 hours daily at full power following sunset, maximizing the plant’s efficacy and efficiency. The investment in the construction of the plant is estimated to be about NIS 4 billion. Hundreds of workers, sub-constructors and suppliers, most of them residents of south Israel and the Negev region, took part in the construction of the plant.

Minister of Energy, Dr. Yuval Steinitz: “Since I assumed office, I have used every possible means to increase the scope of renewable energy production, and by doing so, I expect to meet the government goal of 10% by the end of 2020. I believe that alongside natural gas, renewable energy is of paramount importance in reducing air pollution for the benefit of the health of all of us, and this policy is reflected in the “Plan 2030” that we are leading in order to stop the dependence of Israel on polluting fuels. The breakthrough in this field enables us, in addition to stopping the use of coal, to significantly promote the renewability goal for 2030.

Naty Saidoff, holder of controlling interest in Shikun & Binui Group: “The Saidoff Group has made a strategic decision to invest in Israel and is expected to deepen its commitment to the Israeli economy. The Ashalim thermal-solar plant is one of the flagship projects of Shikun & Binui, enabling the generation of renewable energy, and, by doing so, meeting the needs in terms of sustainability and environmental protection, on the one hand, and, on the other hand, is, in and of itself, a profitable project, which has created jobs for many members of the Negev communities. I am proud to be given the opportunity to build meaningful mega-projects in Israel and abroad, and plan to promote similar projects in the future.”

Eran Doron, head of the Ramat Negev Regional Council: “We are proud to be part of the renewable energy plant and to provide green electricity to the State of Israel. Negev Energy thermal-solar plant in Ashalim contributes to the region, both by supplying clean, non-polluting electricity and by providing jobs to the region’s residents.”

ABOUT THE SHIKUN & BINUI GROUP

Shikun & Binui is Israel’s leading infrastructure and real estate company – a global corporation that operates through its subsidiaries in Israel and across the world. Active in more than 20 countries on four continents, Shikun & Binui is involved in various fields, including infrastructure, real estate development, water, energy, and concessions.